My student is studying audiology, and had to do a paper on one of my favorite subjects – bilingual children learning to read,and what happens in people’s brains when they read a word while having access to two languages.
ETA: Student contacted me to say the paper got an A! I’m so proud.

Knowing the sounds of a language is the most basic stepping stone. When Spanish first graders learned English as a second language, phonological processing skill in both first and second languages helped them recognize words in English.  Children who had strong Spanish sound-awareness did better in English than those who had weaker awareness. English speakers learning French found that phonological awareness skills also transferred into reading the second language.

On the other hand, when languages are not related, phonological awareness is a hindrance – what we call ‘having an accent.’ For example, an English speaker learning Hebrew or Chinese may have difficulty learning the sounds. Therefore, the best time to learn a second (or third or fourth) language is as a child, when the brain is still absorbing the way words are supposed to sound. 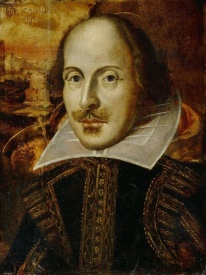 Words get stored in your brain. Where else? The list of words you know is called your LEXICON, and most adults have a lexicon of about 50,000 words. Bilinguals need to double that. Shakespeare, they say, had a lexicon higher than 66,000, and he also made up words which we still used today.

Words in your lexicon get tagged with several aspects of a word including spelling,

Some words are stored with two meanings, like BANK: a money house or the edge of the river.

Both are called “false friends” and make marvelous puns.

Do bilinguals switch-hit with languages? You bet.  When listening to one language, people seem to ‘switch off’ their second language. When they switch, for a while they will still hear the “false friends” in the first language, with unintentionally punny results.